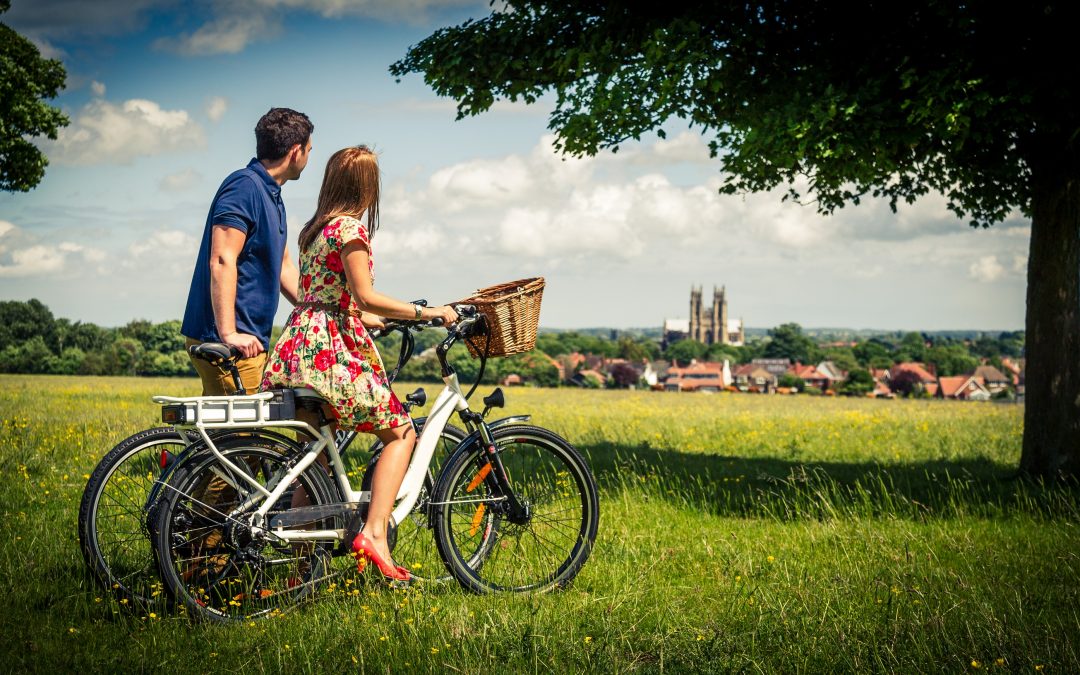 E-bikes are helping to revolutionise the bicycle industry. Unlike a standard bicycle, e-bikes are fitted with an electric motor, which helps to give the rider an added push to make getting from A to B that little bit easier. They stand as a viable alternative to polluting vehicles like petrol-powered cars, particularly over short to medium journeys, meaning they could play a central role in the decarbonisation of transport for years to come.

The Bike Storage Company reports how throughout 2020, there was a 47% increase in the number of internet searches containing the term ‘e-bike’. What’s more, between January and October 2020, one pound in every five spent on bicycles was spent on e-bikes, as more and more people look to take up this healthy habit. There’s little doubt that the pandemic had a profound effect on people’s cycling habits, but the popularity of these two-wheeled machines is unlikely to dwindle even as we move out of the Covid years.

Particularly when on holiday, exploring a new region by bike can give you a much better feel of a place, and allow you to discover spots a car couldn’t reach, as well as being better for the environment. If you’re looking to take up cycling, or are already a self-professed enthusiast, you will want to know where’s best to test your pedal power. Fortunately, the UK is spoiled with endless cycling tracks that zig zag all across the country. But where can you find the most scenic routes to add to your cycling bucket list? We explore some of the best options.

If you’re looking for a cycling route that offers beautiful vistas around every turn and a chance to get closer to nature, pack up the e-bikes and head to the Montrose Basin in Angus. This 11-mile route is tailor-made for beginners and families looking for a laidback ride through the Scottish countryside. It’s truly one of the most beautiful bike rides in Scotland.

Keep your eyes peeled for ospreys, kingfishers and waders that are commonly spotted in the basin, particularly during the summer months. Make sure to pack up a picnic or head to the visitor centre for a post-cycle refuel.

Sometimes, just seeing photos of Snowdonia’s hilly, rugged landscape can make you feel tired. The rough terrain may not seem conducive to being explored on two wheels, but in fact, Snowdonia is blessed with an extensive catalogue of cycling routes to suit all abilities.

If it’s a family-friendly, straightforward route you’re after, look no further than the Yr Afon Trail. Measuring just under 7 miles in length, this forest track is perfect for young families, and is relatively flat throughout (a rarity in this part of the world), barring a few steep inclines, at which point you’ll be grateful for the added thrust of your e-bike. You can’t miss the striking waterfalls which provide a stunning backdrop for your ride, and look out for the old Gwynfynydd Gold mine which is also found along the trail.

When it comes to cycling in the City, there are few places that can compete in the beauty stakes with Richmond Park. The largest of London’s Royal Parks, Richmond has long been a haven for cycling enthusiasts in and around the city, with the wide open space acting as something of an oasis within the concrete metropolis.

There are several ways to explore the park by e-bike, depending on how long you’d like to spend there. The most popular circular route is the Tamsin Trail which stretches for 7.35 miles and has recently undergone maintenance, making it a more enjoyable experience for the cyclists and walkers who share this stunning track.

Stretching along England’s eastern coast, the Cinder Track connects cyclists to the seaside towns of Scarborough and Whitby, some 21 miles apart.

On top of the endless natural beauty that pervades this particular corner of the country, there are plenty of historical highlights along the route – the perfect excuse to dismount and get some respite. The former railway line connecting Scarborough to Whitby lends its name to this gorgeous route, and you can expect to see some abandoned railway platforms along the way.

Cornwall has long been a favourite haunt of staycationers, and its Caribbean-esque waters and breathtaking views attract visitors from all over the country and beyond. If you’re looking to combine a Cornwall stay with a spot of cycling, all roads lead to the Camel Trail, which runs from Padstow to Wenfordbridge.

The route contains all the features you’d expect from a world-class cycle path. Pubs, picturesque villages and postcard-worthy views are in abundance along the 18-mile track, so set aside a day and enjoy a quintessential tour of England’s southwest coast.

This website uses cookies to improve your experience while you navigate through the website. Out of these, the cookies that are categorized as necessary are stored on your browser as they are essential for the working of basic functionalities of the website. We also use third-party cookies that help us analyze and understand how you use this website. These cookies will be stored in your browser only with your consent. You also have the option to opt-out of these cookies. But opting out of some of these cookies may affect your browsing experience.
Necessary Always Enabled
Necessary cookies are absolutely essential for the website to function properly. This category only includes cookies that ensures basic functionalities and security features of the website. These cookies do not store any personal information.
Non-necessary
Any cookies that may not be particularly necessary for the website to function and is used specifically to collect user personal data via analytics, ads, other embedded contents are termed as non-necessary cookies. It is mandatory to procure user consent prior to running these cookies on your website.
SAVE & ACCEPT